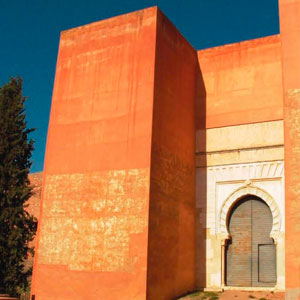 During the thirteenth century, two sister cities grew in parallel in the current Granada, independent but needing one of the other. On the Sabika hill, rises the palatial city of the Alhambra, the official residence of the royal family and their servants and artisans. While at his feet, along the Darro river, life flowed over the bourgeois city of Granada, inhabited by artisans and merchants. Although on a different scale, the same artistic and functional standards can be recognized and identified in both cities during this special tour.

In the 11th century, the Zirid dynasty settled its capital in Granada, on the hill of the Alcazaba Qadima, and since then, the city began to gain importance within Al- Andalus: the population increased, so that the city extend into the plains nearby, new neighbourhoods grew across the river, such as the suburb of Al- Fajjarin, today called Realejo neighbourhood. For strategic and geographical reasons, Alhamar, the founder of the Nasrid dynasty, moved the seat of his kingdom to the Sabika Hill, where a Ziri fortress already existed, and the new city of the new sultans was created around it. 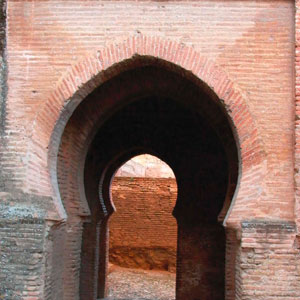 The Alhambra in Granada was not only the Nasrid royal residence, but it also had an important role as “citadel", "another rising city, above the rich and populous Granada" as described in the 14th century by Granadian poet, Ibn Al- Khatib . It was a private town, with its medina and main streets, as High Royal Street, Down Royal Street, or Ronda Street, around the entire perimeter of the wall, flowing into the Justice Gate.

These two cities Granada and the Alhambra, gather similar features like a sober outward appearance, coupled with a richly adorned interior. In the case of the Alhambra, it was the highest representation of Nasrid art, but it also may be seen previously in Granada in buildings such as the Royal Room of Santo Domingo or the House of the Girones.

This itinerary could be modified by order of the Patronate of the Alhambra, the body that regulates public visit the monumental complex. If any of the locations specified could not be visited, the agency would change the tour without reducing the duration time.

Comfortable shoes and intake of water are advisable during the tour, due to the length and duration of the tour.

Our payment encryption system will confirm your reservation once the purchase is completed. Payment may be made by credit card (VISA and MasterCard ) or bank transfer.

Your purchase will be confirmed by email along with a voucher of the visit, which should be printed and given the tour guide before the visit. The voucher is the only valid proof of purchase and any other supporting documents are NOT accepted for the tour.

If you need to cancel or modify your reservation, contact us via our customer service form.

It is advisable to get to the meeting point at least 10 minutes prior to the departure of the tour.

This visit takes a really particular itinerary, focused on specific and clearly defined aspects of Granada and the Alhambra. The tour does NOT include full access to the Nasrid Palaces, the Alcazaba and the Generalife . However, areas normally closed to the public in the monumental complex and other selected sites in the city of Granada are visited.