Ticket with themed visit tour to Alhambra: The Carolina age 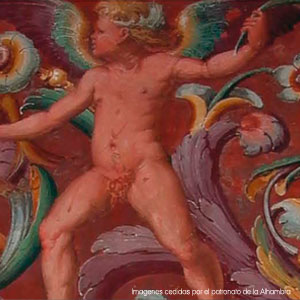 This route the Alhambra and Charles’ Granada: The Emperor´s dream, starts from the palatial city of the Alhambra of Granada, with a tour which shows all links between the Moorish monumental complex and the city, with the grandson of the Catholic Monarchs, the Emperor Charles V. A guide expert in heritage will lead visitors through architectural changes affecting the city of Granada, Castilla crown symbol, and will show how the history of this city changed after being chosen by Emperor Charles I of Spain and V of Germany, and his wife, Isabella, princess of Portugal, to spend a few months after their wedding.

The monarchs moved their court to Granada and began the construction of the Palace that will be named after the emperor, next to the Nasrid Palace. Although this project was unfinished, it will always be remembered as a sign of the rise of this city, wanted and searched by the emperor, and how quickly it declined after his abdication. 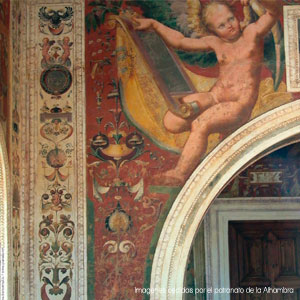 During the sixteenth century, Granada experienced a gradual remodelling, leaving apart its old Muslim city structure and becoming a modern Christian city. Spaces for the enjoyment of the people, as Bibrambla, Campo del Príncipe (Prince Fileds) or Plaza Nueva were expanded to carry out festivals and ceremonial events and the city also grew outside the walls. The old Moorish Granada was hispanicized during the early years of the conquest, as prescribed by the Catholic Monarchs. But it was his grandson who wanted to establish his government here and urged its renewal and the expansion of its structures, according to Renaissance ideals imported from Italy.

The royal city of the Alhambra of Granada remained as an emblem of power, becoming host city of the court, where the emperor lived, with many of the personalities of his government.

Sometimes, the order of the visit could be modified, for prescriptions of the Patronate of the Alhambra of Granada. In case the tour may not visit any of the specified locations, the agency will change the route as ordered by the Patronate, without reducing the duration time.

Due to the duration and length of the route, we suggest you to wear comfortable shoes and drink plenty of water during the visit.

Your reservation is confirmed automatically when the purchase process is finished, thanks to our payment system by encryption. You may pay with your credit card (VISA and MasterCard) or by bank transfer.

We will send you an email confirming the purchase and a voucher of the visit. You should print this voucher and give it to the tour guide before starting the tour. The bonus is the proof of purchase and any other supporting documents will NOT be accepted to make the activity.

If you need to change or cancel your reservation, please contact us via our customer service form.

We recommend you to be in our meeting point 10 minutes before departure of the tour.

This visit makes a very special tour, focusing on special and specific aspects. The Alhambra tickets, therefore, do NOT include full access to the Nasrid Palaces, the Alcazaba or the Generalife, but instead includes areas normally closed to the public in the monumental complex and other selected places in the city of Granada.